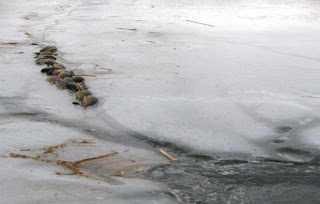 I haven't seen this before; evidently with the thaw yesterday a lot of the fish in the pond swam to the top of the ice and then couldn't get back under before they froze. There were several of these fishy lineups. Very strange.
Posted by Batmensch at 5:02 PM No comments:
Email ThisBlogThis!Share to TwitterShare to FacebookShare to Pinterest

After the Lord of the Rings

This post is dedicated to those that have read the Lord of the Rings trilogy, and perhaps the Hobbit, and wish to dig a little deeper into Middle-Earth. Tolkien's fiction is unique in it's depth and lends itself well to further reading, but where do you start?

Tolkien's son Christopher, a professor of English Literature in his own right, has released many books relating to, editing and sometimes even finishing his father's works. The obvious first choices are The Silmarilion and The Children of Hurin. The are both indispensable, in my opinion; in particular, the Silmarillion has much of interest to LotR fans, including the origins of Sauron, an explanation of what a Balrog is, where dragons came from, and so much more, including a retelling of the creation and early history of the world, from the point of view of Tolkien's elves! It ends with the history of the events leading up to the War of the Ring itself. However, at best, it is a much more difficult read than LotR or the Hobbit, since Tolkien never meant it to be a linear story, and much of it is written in an archaic style of English.

My real suggestions are a little more off the beaten track:

I'd also like to mention a work with a hidden treasure, The War of the Ring, Part 3. A slim book in the series of Christopher Tolkien's books about his father's writings, it has one truly outstanding piece, Tolkien's original Epilogue to the Lord of the Rings, a sweet story from the life of Sam Gamgee in the Shire AFTER Frodo and Bilbo sail into the west.
Posted by Batmensch at 9:34 PM No comments:
Email ThisBlogThis!Share to TwitterShare to FacebookShare to Pinterest
Labels: Balrog, Gandalf, Hobbit, J. R. R. Tolkien, Lord of the Rings

Gen. Eric Shinsecki as Secretary of Veteran's Affairs; take that, Bushies!
Posted by Batmensch at 10:30 AM No comments:
Email ThisBlogThis!Share to TwitterShare to FacebookShare to Pinterest
Newer Posts Older Posts Home
Subscribe to: Posts (Atom)