Project Fi, not for me

I really wanted to use Project Fi.  I'll just admit it: I wanted it to work because it's Google and it's different!  And it is both those things, but that was not quite enough reason to stay with it.

I signed up for Fi about a month ago, and bought a nicely cheap Nexus 5x when they were selling them for $200 with sign up.  I think that promotion is over now; however, I got to keep the phone when I cancelled, and I do like the phone a lot.

The real issue is that I'm not doing a lot of international travel right now, and I have the world's cheapest (as far as I know) plan for (non-family) big-data users, T-Mobile's $30/mo "Walmart" plan*, which only provides 100 minutes of talk but 5 GB of data over LTE/4G (after which you are capped at 3G speeds).  T-Mobile's LTE coverage in the Bay area is fine for me, and I hardly ever need to talk to anyone when WiFi isn't available.   It turns out I use most of that 5 GB every month, which would have given me a monthly bill over twice as high using Fi.

If I was doing a lot of international travel, I might change my mind.  I used T-Mobile's Simple plan when I last went to New Zealand ($70/mo) and it more or less worked in most places, but the data rate cap was sooo slow.  I would have been better off buying a local SIM (and pointing my Google Voice number at it!).  Project Fi uses a 256kbps data rate cap internationally which, although also pretty slow, would have been a big step up!

Generally, I was a little disappointed that Fi seemed to use Sprint a lot more than I expected; given that my T-Mobile coverage is generally good I was expecting to use that more than I did.  And Fi's vaunted high-quality WiFi coverage didn't seem to add much to my experience.

Still, it was kind of cool, and I got a cheap 5x out of the experience.  And if my wife starts dragging me to international destinations in the future, I'll give some thought to trying it again.


* The "Walmart" plan is available at Walmart or online at T-Mobile, but nowhere else.
Posted by Batmensch at 7:15 PM No comments:
Email ThisBlogThis!Share to TwitterShare to FacebookShare to Pinterest

I have to admit, I've been kind of pissed for a while about RedHat going with systemd as a replacement for init.  I spent a lot of time becoming fluent with init, and all of that is now defunct on the platform I work with the most.

I've spent some time with systemd now, though, and I have changed my mind.  systemd has some really strong advantages over init:

1. The files are so much simpler!  systemd has the most obvious init functions, like stop, restart, status built-in, so you don't have to come up with shell scripts to do them; you only really have to tell systemd where your binary is and what it should be called.  100+ lines of BASH or SH code can be distilled down to about 7 lines of systemd.

2. It's much safer.  Once again, the files are not scripts, they are simply metadata.  It would be difficult to make systemd do something weird and unsafe.

3. init is still supported, mostly.  Not a bad feature!

So, check me off as a reasonably happy systemd user.
Posted by Batmensch at 6:08 PM No comments:
Email ThisBlogThis!Share to TwitterShare to FacebookShare to Pinterest

Here's a picture I took of Jupiter with the Samyang 800mm lens.  It is about 100% cropped.  You can see a little color and (just barely) you can see a couple of dark bands running almost vertically.

Very difficult to photograph with the Samyang, but it's still a lot of fun to try! 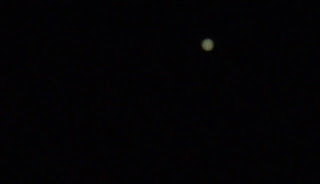 And here's a pic of Saturn; note the space between the rings and the planet! 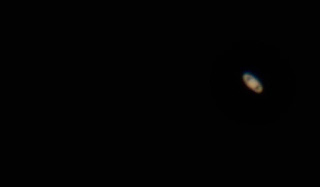