Debt is not an evil, it is a tool.

With a chainsaw, you might cut your own hand off. You also can cut some firewood.
Posted by Batmensch at 8:07 PM No comments:
Email ThisBlogThis!Share to TwitterShare to FacebookShare to Pinterest 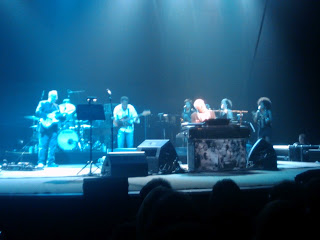 Just saw Steely Dan in San Francisco, with my long time friend and music fanatic Jim Pire. They performed the entire "Royal Scam" album plus some favorites at the end. The show was great! Fagin and Becker were both lively and fun; Fagin seemed to be very excited and rolled around on his piano bench, looking something like an old grey Stevie Wonder.

At one point, during a between-song lull, someone called out "Freebird" and Fagin called him an asshole, which certainly seemed like a reasonable thing to say in context.

The backup band was wonderful. The lead guitar player knew all the famous licks perfectly, and his own improvs were tasty and very much too the point. The drummer was strong, always on the beat and understated except where, such as during the solo in "Aja", he needed to be showy. And the trombone player, of all people, really got people going whenever he had a solo. The three female backup singers sang strongly and got their own solo vocals, taking the normally male leads in "Dirty Work".

Very cool the hear the entire album; it was played strongly and with great fidelity to the original. All except for "Everything You Did", which was always the weakest song on the album. Evidently "The Dan" felt so too, and gave the song sort of an island beat, which certainly made it a bit more pleasant to listen to.
Posted by Batmensch at 1:53 AM No comments:
Email ThisBlogThis!Share to TwitterShare to FacebookShare to Pinterest

I am deeply enjoying the experience of listening to the 40th anniversary edition of Red, by King Crimson, one of my top 10 albums of all time.

Much as i loved the original, I had two complaints:

1. The title track was flat sounding, like they recorded it in a fairly flat sounding room and did nothing to liven it up.

Well, this problem is fixed handily in the 5.1 mix; separation increases the fidelity of each instrument and the performance comes to life in a way that needs to be heard.

2. Providence, the first song on side two, was long and unlistenable. It was certainly unlistenable to me; I wanted more pounding, screeching prog rock and providence was several (too many) minutes of unnecessary noodling to my ears.

But in the 5.1 mix the clarity of each instrument is increased, and somehow the creepiness of the improvised, "concrete" performance is emphasized to the point where it becomes a new treasure, to me, and that means a big piece of this already wonderful album is now accessible to me for the first time. Bravo, gentlemen.

It also contains a CD version, versions in 96Khz 24-bit stereo, several unreleased tracks of varying interest, and some VERY well recorded videos from French television of what evidently seems to the be "Starless and Bible Black" era band performing songs like Lament and LTIA pt II, and very well.

I give it a good *****, it's wonderful, and certainly not more expensive than it needs to be.

I bought a white phone; why are the headphone and adapter cables black? Ick.

I thought it would be nice having a hardware camera button, but pressing it moves the phone, making photos more blurry. In broad daylight it'll probably be more useful.

The included headphones are comfortable enough, but pretty much unusable on my bicycle as they seem to amplify the noise of air rushing by my ears.

The trackball is not all that accurate, but with that and the keyboard I don't accumulate fingerprints on the screen nearly as quickly as on the iPhone.

Ah, multi-tasking. How is it the iPhone runs MacOSX but can only run one app at a time? Works great on the G1.

The software in the Android Market is definitely more crude than the iPhone stuff, on average. However, except for commercial stuff such as ebook and audible apps, I've been able to find apps to do everything I used to do in the iPhone and do it well. For similar money or for free. I'm impressed.
Posted by Batmensch at 6:31 PM No comments:
Email ThisBlogThis!Share to TwitterShare to FacebookShare to Pinterest

An Open Letter to Apple

Re Apple Lossless versus FLAC: screw you guys. Really.

Love, Hugh
Posted by Batmensch at 12:36 AM No comments:
Email ThisBlogThis!Share to TwitterShare to FacebookShare to Pinterest

So I'm going to migrate off of iPhone 3G/AT&T (that's a subject for a different blog entry). 2 days ago I purchased a T-Mobile G1 phone and the associated phone and data plans. This entry is going to give my first impressions of the new phone and compare it with the iPhone 3G.

The G1 is definitely a sidegrade; there are better iPhones and Android phones available now. However, the G1 is probably a placeholder until I get a better phone (the Nokia N900 might eventually fill the bill), and many new Android phones are on their way, so I went with a lower priced option (with a physical keyboard).

First off, the G1 has already become a much better phone in the two days since I bought it. That's because, overnight, it upgraded itself from firmware version 1.1 to 1.6, without which it frankly wasn't really on the playing field with the iPhone. It makes a big difference, in mostly small ways; for instance, the camera, nothing to write home about even now, was pretty much unusable before the upgrade, and it can now shoot video. Also, several applications that I tried out in the store (on demo phones with higher firmare versions than mine) were not available before the upgrade. There was no software keyboard until the upgrade. But now, it's a pretty damn good smartphone.

When you look at pictures of the phones the G1 looks much larger, but it really isn't. It's X and Y sizes are about identical to the iPhone and it's Z axis is as much deeper as you'd expect from having a physical keyboard available. With the keyboard the G1 doesn't feel quite as solid as the iPhone, but the keyboard foldout mechanism itself seems about as robust as it could be. It feels damn good, really. All other things being equal, they physical keyboard adds a lot to the phone; using an SSH terminal emulator is a piece of cake now, and typing in notes is much more pleasant than on the iPhone.

The screens are about the same size, and the colors seem good on both. Can't complain about the new one.

The lack of a dedicated analog headphone jack on the G1 is not a problem as long as I have the included dongle. I'm sure I'll feel differently when I misplace it for the first time ;)

Battery life before the upgrade was poor; now it's fair, or actually pretty close to the iPhone. I can deal with it, but a better battery would have been nice on both phones.

The web browser seems similar on both phones, which makes sense since they are both based on Webkit. I don't see much difference between them, although it is very nice to be able to type in URLs with the physical keyboard.

It's very nice to be able mount the G1's formatted smart card on my Mac and copy files to it directly.

This is a very tentative impression, but I think the phone service quality is a little better on the G1. People I talked to long distance sounded better to me than they do on the iPhone, and the people I talked to thought my own voice was very clear.

At this point, there's just not that much difference between the two hardware platforms for me. The difference is mainly in the software. I've been able to find a decent SSH client for the G1, and there's a Facebook client, but it's not nearly as powerful as Facebook on the iPhone (yet). But I haven't been able to find a good book-reading piece of software for the G1 yet, similar to the eReader or Kindle apps. However, I know eReader is working on a client for their ebooks for the G1 which should come out this year. I certainly hope there will be Kindle app on G1; the G1 uses the Amazon MP3 store as their version of iTunes, it makes sense that they might also collaborate on ebook sales, but I haven't even heard any rumors about them doing it.

The point being, the Android App Market is not nearly as well stocked at the iPhone's, but it it is still far more open, and now that Android phones are proliferating I think this will change; I think it may be time for Apple to rethink it's really restrictive app store policies. But I'm not holding my breath.

More later.
Posted by Batmensch at 8:38 PM No comments:
Email ThisBlogThis!Share to TwitterShare to FacebookShare to Pinterest

I miss my little girl cat.

I miss my Olive. She was a good girl.

Olive, I tried to give you as good a life as possible. Not a life of luxury and apathy, but one of interest and inclusion. The goal was that you would not become one of those fat, uninterested cats that everyone ignores in the back of their houses, with kitty-alzheimer's. I did what I could to keep your life interesting, in the limits of our home and lifestyle and what your Mom and I could stand to do.

We put up with your endless chatter and energy, your jealousy and your very low sense of humor, your gastric problems. We played with you when we didn't feel like it, protected you from psycho-cat as much as we could, and I took you as far afield as you would go.

It was so worth it; we got back endless playfulness, intelligence and love. And even though you were afraid of psycho-cat, you still loved her; she was like an alcoholic mother, dangerous and annoying, but still Mom.

I think we did what we could for you, and you had a good life. This takes some of the sharpness out of the pain of losing you, but we still miss you.